You might recall I have visited a bank museum before, that of the Banco Ciudad.  It was a very interesting look at the bank’s founding and role in society, and I was slow to add any other bank museums to my list when I found another one.  I assumed it would be similar.

Banco Central is the national bank of Argentina, and its history is of course tied to the economic history of the country, which is, to put it generously, bonkers.  The museum, officially known as the Museo Histórico y Numismático Héctor Carlos Janson, takes an entirely different course than that of Banco Ciudad and focuses on the history and development of currency.  That history is also bonkers.

The first room of the museum looks briefly at the history of currency in South America.

Next up are examples of colonial-era currency.

The colonial coins were minted in Potosí, in Bolivia, close to Cerro Rico, a huge silver mine that Spain spent years plundering.  A stunning number of miners have died there over time, earning the place the name “the mountain that eats men,” because nothing in colonial history isn’t horrifically grim (mining the mountain continues to be horrifically grim).

Next up, the first currency minted following independence: 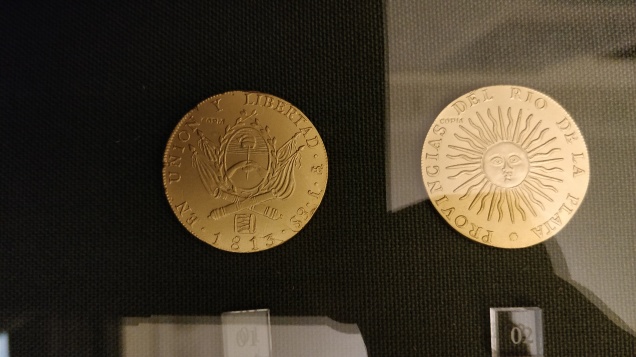 Money was minted by the provincial governments, which is why the gold coin above says “Provinces of the Rio de la Plata.”  The Banco de las Provincias Unidas del Río de la Plata was created with the aim of unifying the nation’s printed currency, but the other provinces were not cool with this so it did not happen (had a lot to do with economic troubles from the war with Brazil).  So, money from all over continued.

Notes were printed abroad, and included portraits of important figures of independence in the New World, such as Simón Bolivar, George Washington, Ben Franklin, and William Penn. 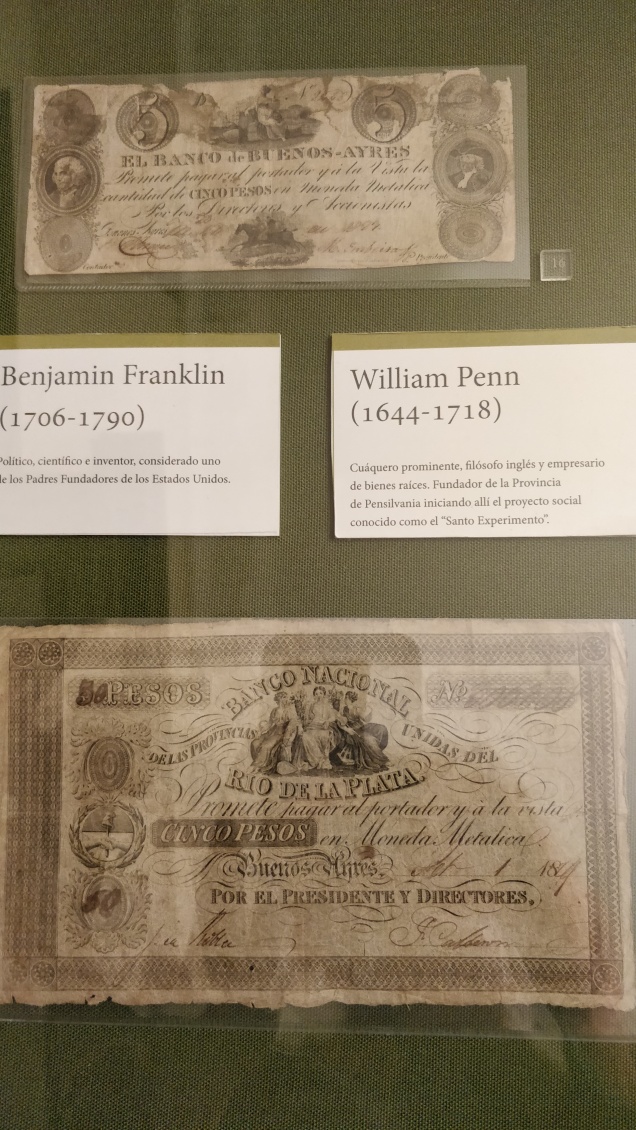 Things got weird, as things tend to do, during the civil war.  General de Rosas, blurrily pictured below, dissolved the national bank and created an administration to issue paper money and coins.  These were monedas corrientes.  I am not nearly as well-versed in Argentine history as the museum’s informational panels assume, so I can’t much fill you in beyond that.

You will note, possibly, two things about the following bill: One, its domination is 1000, which means it was rapidly devaluating, generally not at all a good thing; and two, it’s got palm trees and kangaroos on it.

The money was at the time printed in Buenos Aires, but the plates were engraved in London.  The museum notes that printing houses at the time worked for several countries and contends that’s why the kangaroo and llama appear together on an Argentine banknote, but frankly I still have a lot of questions.

I also find the next phase of currency a wee bit confusing, something that can likely be attributed once again to my lack of knowledge of the nation’s history, but next you get “pesos fuertes” and “pesos corrientes.”

Here we take a small detour into a historical oddity.  A French lawyer showed up in the west of the country and in 1860 declared himself “King of the Araucania and Patagonia.”  He then created a constitution, a flag, and a national anthem, and started minting money.

He was arrested, declared insane, and deported, but he apparently took his claim very seriously and tried, for the rest of his life and without success, to really make it stick.  He died childless, but people have claimed to be his heirs for awhile now, and they actually still mint (technically worthless) coins, I guess for the sole purpose of having them displayed at the Central Bank museum.

Now, I’m going to hop forward about 100 years, skipping a major financial crisis, to get to the financial crises of recent history.  There was a substantial devaluation during the military dictatorship, which attempted to stabilize things, but, spoiler alert, did not.

The military dictatorship fell and democracy was restored in 1983, but there was still a huuuuge problem in the form of a massive external debt, currency devaluation, and serious inflation.  The new government started whacking off zeroes, so that 10000 old pesos would equal one new peso.

It did not work.  These were printed in 1983; by 1985, 10000 peso notes were back in circulation.  That year, the president decided what the country really needed was to start from scratch.  The peso was old and busted.  The Austral was the new hotness.

The name “peso” made its return with the “pesos convertibles” in the 90s, when the peso was pegged to the US dollar at a 1 to 1 rate.  This also didn’t work and led to the financial crisis of 2001, which many Argentines can tell you absolutely wild stories about.  The president famously fled the Pink House by helicopter.  Some of the bills from this period are still in circulation; I could dig some out of my wallet right now. 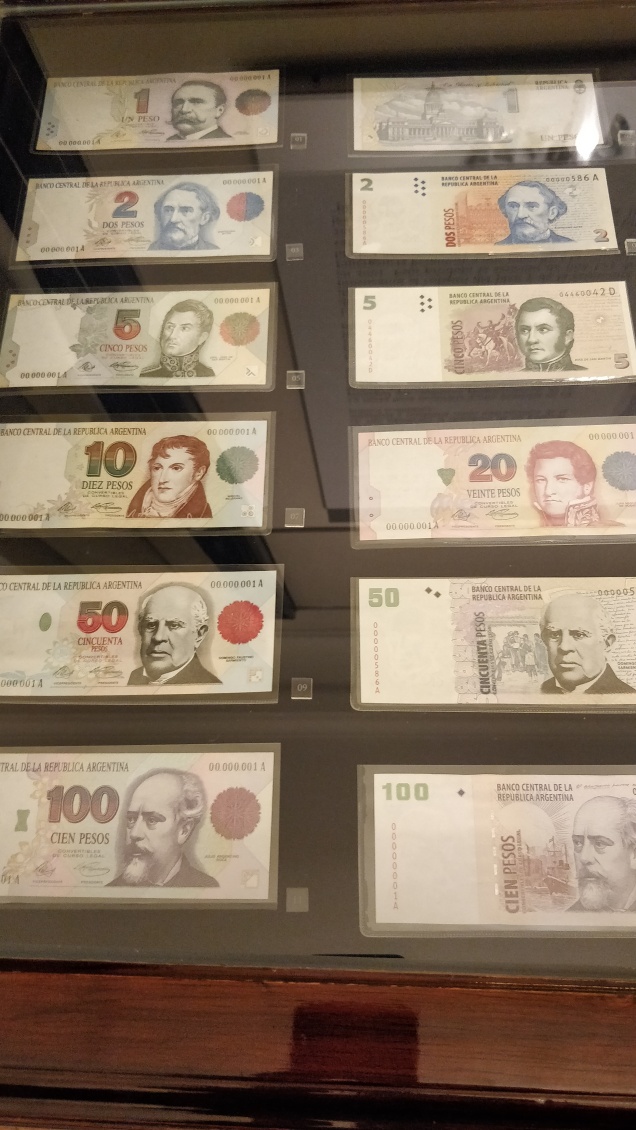 This time of utter economic collapse led to a widespread return to a barter economy, leading to the use of these barter network vouchers.

Things got…okay after that.  And then less okay.  That’s kind of how it goes here.

The current government, for political reasons I’m not going to get into, decided that the money needed a makeover, so now it’s all about the nature.

After the rooms of currency, the museum has some historical artifacts related to the history of banking in Argentina, including French scales used to weigh coins. 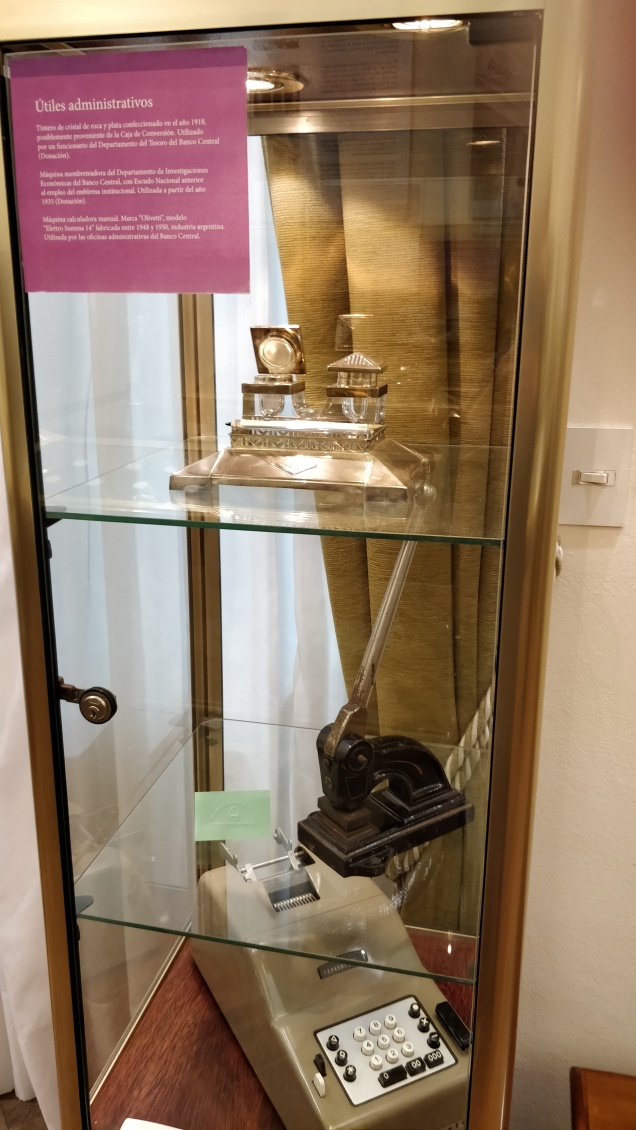 Eva Perón spent a few months working out of the Central Bank, and they have her office furniture.

I’m going to wrap this us with the museum’s most endearing feature, a selfie point.

The Banco Central Museum is located in the financial district of Buenos Aires, blocks from the Plaza de Mayo, at San Martín 216.  It is open Monday through Friday, 10am to 4pm, and is free.  There are some information cards in English for each room, although several were missing when I visited, and they are not particularly complete.  The main signage is solely in Spanish.  As it is located in the city’s heart, you can get to the museum in a million, billion ways.