Tango, as you might have deduced if you’ve spent 15 seconds in Buenos Aires, is kind of a big deal here.  There are tango street dancers, tiny stages for performers at touristy restaurants, and ample opportunities to be tutored.  There are big, flashy tango shows, small tango shows, tango shows at historic tango bars/restaurants.  Tango postcards, tango art, tango CDs, tango souvenirs.  Hand to god, I have seen a wooden statue of Jesus playing a bandoneon for sale in San Telmo.  I totally should have bought it.

But the tango isn’t just for the tourists.  The dance and the music are very real and integral parts of the Buenos Aires cultural identity.  There are milongas of all sorts, where people go to dance.  The two parks closest to my place roll out temporary dance floors on Sunday evenings in the summer.  Tango music is everywhere.

Which brings us to Carlos Gardel. 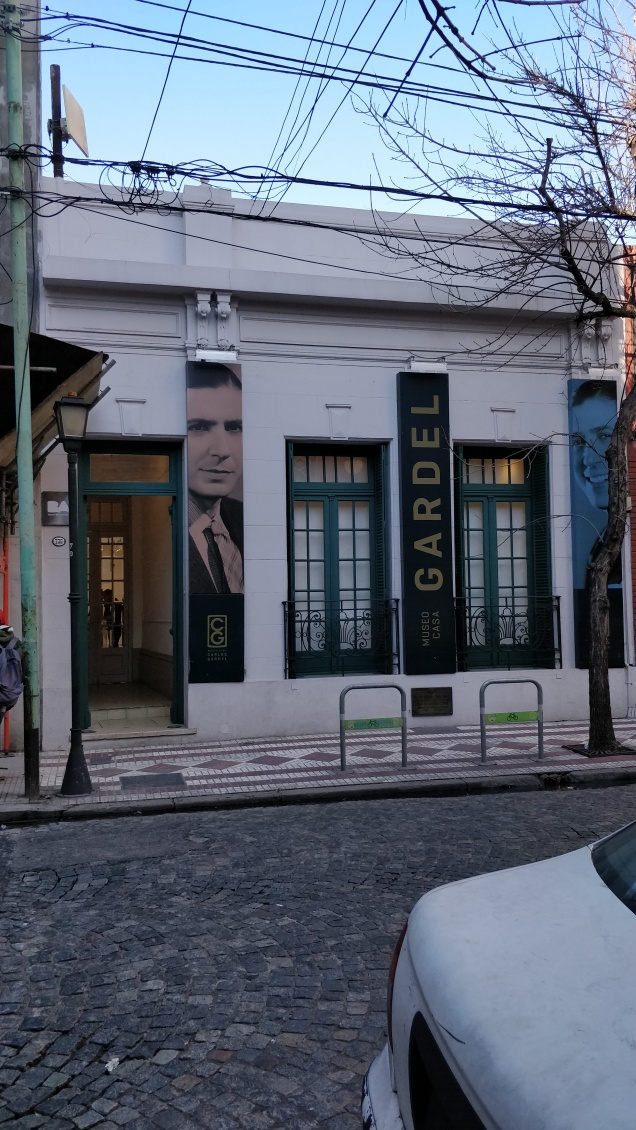 Gardel was born Charles Gardès  in 1890 in Toulouse, France, to a young laundress and a dude who was married to someone else.  Berthe Gardès did officially call out her baby-daddy, but we know how these things go for women, and when little Charles was two, Berthe moved them to Buenos Aires to begin a new life as a “widow.”  There, they would be called by the Spanish version of their names, Berta and Carlos Gardel.

Incidentally, Paul Laserre would show up in Buenos Aires to ask Berta to marry him and “legitimize” Carlos when Carlos was around 30 years old and had conveniently released his first hit record.  Carlos told his mom that if she could live without the guy, so could he, and didn’t see him.  WELL PLAYED.

Carlos himself would muddy the facts of his birthplace by claiming Uruguayan citizenship, stating he was born in Tacuarembó, Uruguay (he then acquired Argentine citizenship).  This was probably done to smooth over an upcoming tour of France, has he had never registered for military service, as required of French citizens.  This paper trail has led to different early biographies and native son claims, but look the museum has a copy of his French birth certificate so Uruguay should pipe down.

The museum is inside a house in Abasto that Gardel bought for his mom (he lived there for awhile, as well), and consists of four rooms.  The first room is dedicated to his early life.  In a museum dedicated to a musician, the multimedia experience is pretty important, and the Museo Carlos Gardel does a pretty credible job providing it, including the rather touching addition of the sort of song Berta would have sung for little Carlos.

The next room of the museum is the recording room.  It’s quite small, but here you can see artifacts from his music career and select from over 300 recordings made by Gardel to listen to at the listening stations. 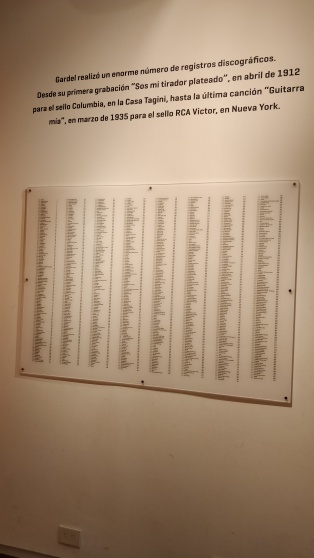 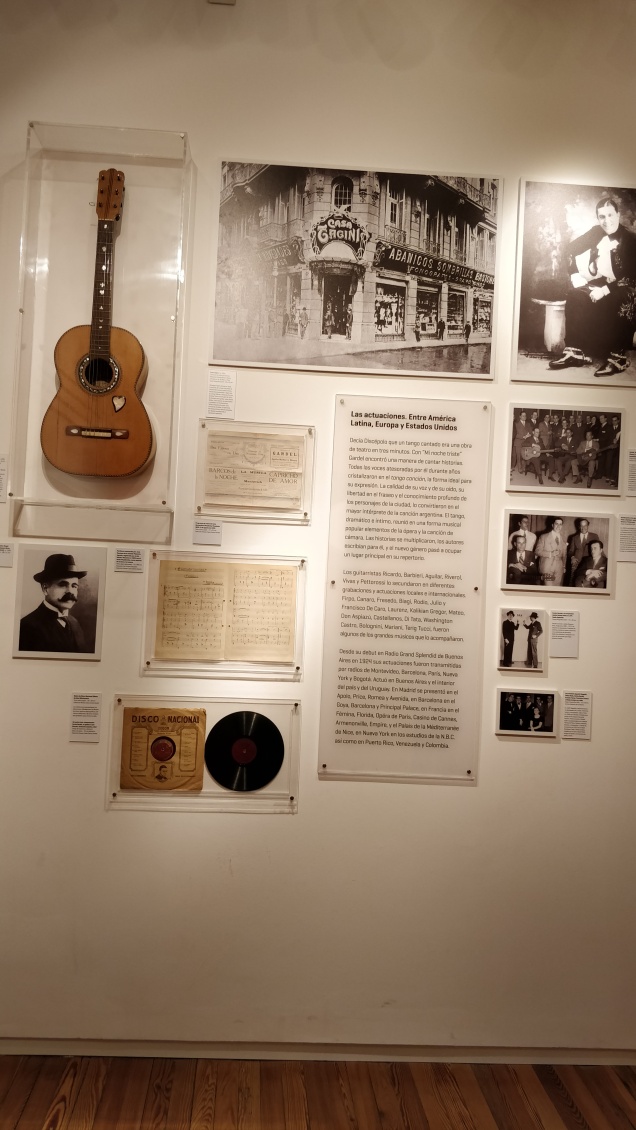 To continue on from the record room, you go through this doorway:

The room on the other side of the heavy curtain is the funeral room. Gardel died at the age of 44, at the height of his music and film career, in a plane crash in Colombia.

The final room is the cinema room, which I think is a fitting way to end the museum, not only in terms of floor plan, but also in terms of image.  After all, Berta would continue watching Carlos’s movies to see him again, and this is a lasting legacy for a performer.

The room includes a timeline of his movies, photos from the production, and posters. 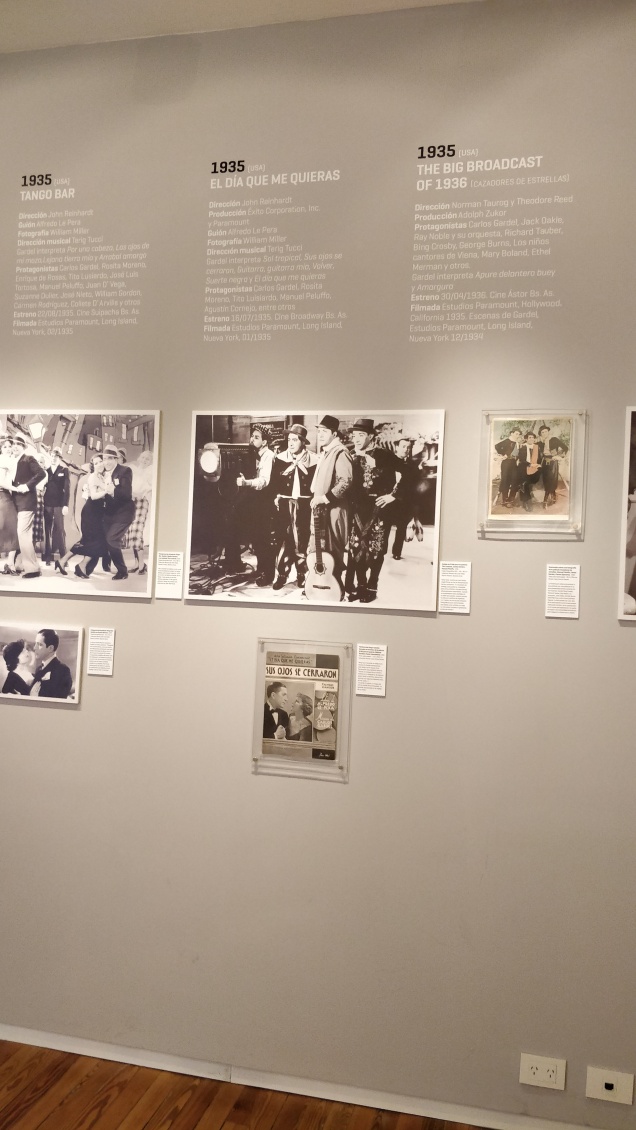 So, if you’re super into the history of tango, 1930s cinema, or turn of the century music, Museo Casa Carlos Gardel is worth a visit (not to be confused with the Gardel museum outside of Tacuarembó because Uruguay just cannot let it go).   The signage is all in Spanish, but they do have an English language handout that will walk you through the rooms.

The museum is located at Jean Jaurés 735, close to the H and B subway lines, in Abasto. As always, check their website for current information, but as of this writing, the entry is 30 pesos (about US$1 right now), free on Wednesdays and generally for students, school groups, retirees, disabled visitors and their attendants and those under 12. It’s closed on Tuesdays.  It’s a residential area, so there are some places to eat here and there.  There’s also some pretty nice fileteado-style murals across from the museum.