The Espacio Fundación Telefónica is the community cultural center for a multinational communications company, Telefónica.  It hosts workshops and small but nicely curated exhibits, such as this Houdini one, which recently finished its run.  It only took about 45 minutes to see everything, and while it was light on Houdini-related artifacts, it did have some pretty cool vintage magic and illusion objects, as well as a good layout and use of its small space.  Houdini’s biography was presented and given some contemporary context, and the signs were in both Spanish and English.  It was free, fun, and interesting.  Here’s my photos.  Sorry this is so short, but I need a nap. 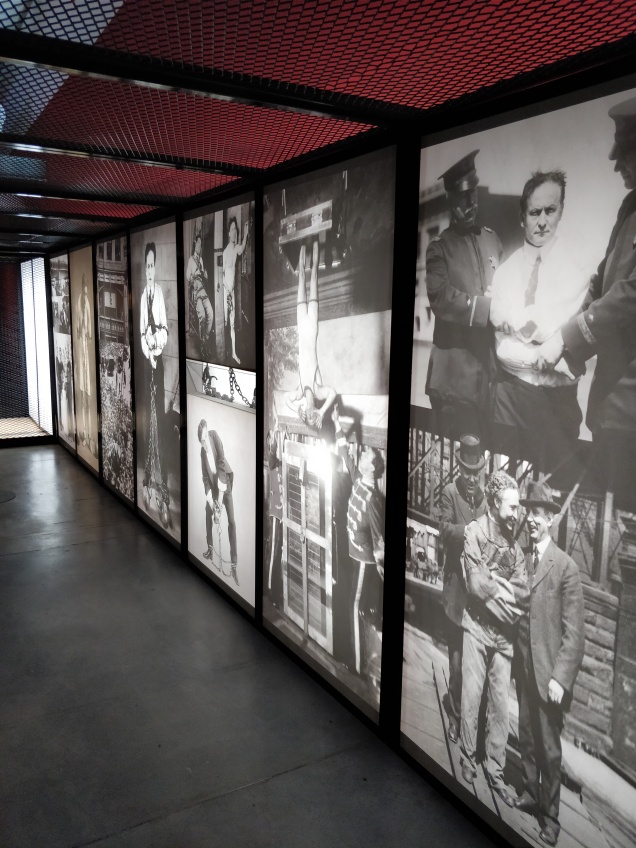 Our third stop in Luján is part of the museum complex, in much larger buildings, because it’s got a bunch of moving things in it! 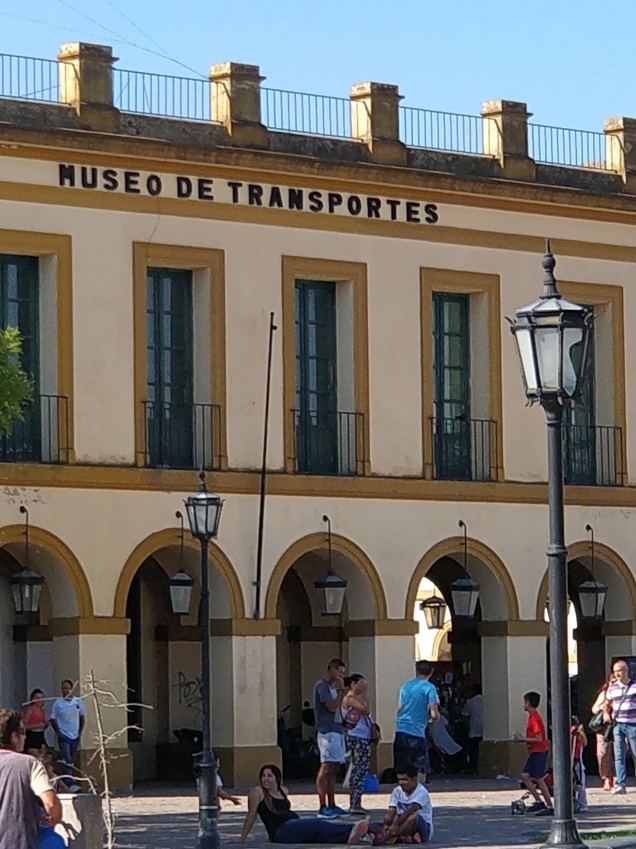 Now, normally, I’m not a big fan of transportation museums.  Things that transport are pretty utilitarian to me; it would be like visiting a museum of hammers.  Cars are especially boring.  But fortunately for me, this museum was chock full of OLD-TIMEY TRANSPORTS.  And those are much more fun.

Old-timey things are often interesting because of their scale.  It is difficult, for whatever reason, to accurately imagine the size of things without our bodies physically there to compare to.  If you only see representations on TV or on paper, it’s still a bit startling when you find yourself occupying the meatspace with a covered wagon, a steam engine, or an NBA player.

The museum’s steam engine and train cars were not available to climbing, but they thoughtfully included very scary mannequins.

Let’s take a look at a carriage for classy people!  This one was presidential, so it has the fancy national logo.

I really liked the bicycles.

You can also find the Plus Ultra, the first plane to cross the southern Atlantic, in 1926. It was given to the Argentine Navy and also delivered mail.

There is a sailboat!

Now there is apparently a popemobile that I did not notice, and there are many, many carriages on display, but the most impressive are the 1880 funeral coaches:

So that’s the Museum of Transport, and it was much more fun than I expected it to be.  Open seven days a week with a very inexpensive ticket.  I leave you with a couple of views of a nearby mural, that I think is on one of the museum buildings.

The museum is comprised of the oldest buildings in the province, if my obscenely poor Spanish serves, and so provides some lovely examples of colonial era architecture.

It also provides examples of a variety of historical thingamajigs.

And the requisite haunted doll.

It’s a thoughtful, wide-ranging museum, and it includes some comparisons between olden times and modern ones. Ever a fan of interactivity in museums, I was pleased to see a wall that invited visitors to write down what they see in an old painting of a young child. 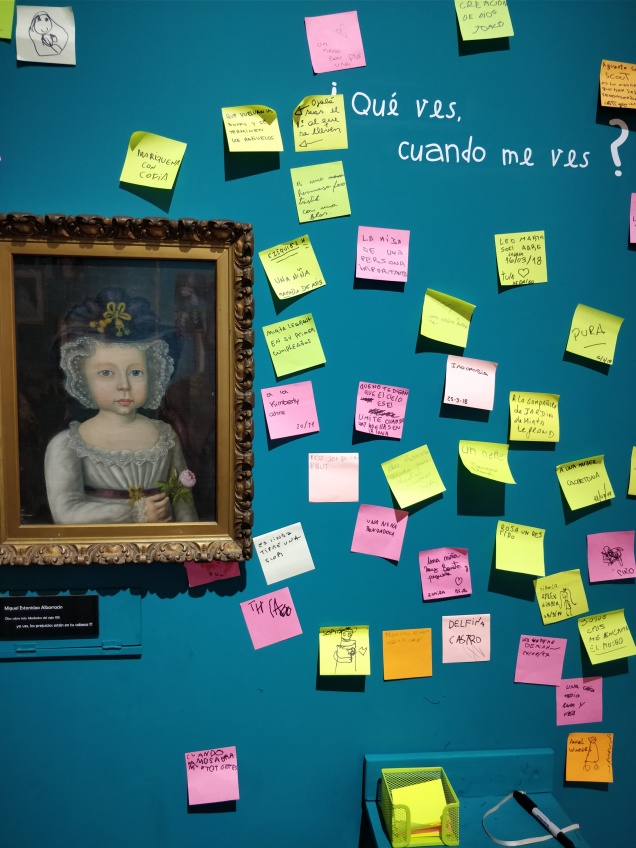 Speaking of political scribbles!  A lesson in political cartoons:

And, very pleasantly, a comparison of family life and marriage, which includes, for modern examples, two married men and a bi-racial family.  It also talks about how the idea of what constitutes “women’s work” has changed.

There’s more there!  It’s really a lovely, thoughtful history museum and worth a visit.  It’s closed Mondays and Tuesdays except for previously arranged guided tours.  There is a entry fee, and I can’t remember how much it is, but it was inexpensive.

This little warm hug of art, I swear.

Now, I am very, very behind, owing to a burst of paying work that I reluctantly gave priority to, so here’s a very brief introduction to a teeeeeny tiny museum.

The Museo de Bellas Artes is located, along with most stuff anyone ever sees in Luján, on the long main square that ends in the basilica. It’s free, and you might spend half an hour there. I believe the art is primarily Argentine. I am especially fond of the motorcycle mantises, from the series “Motomantis,” by Marta Gonzalez. 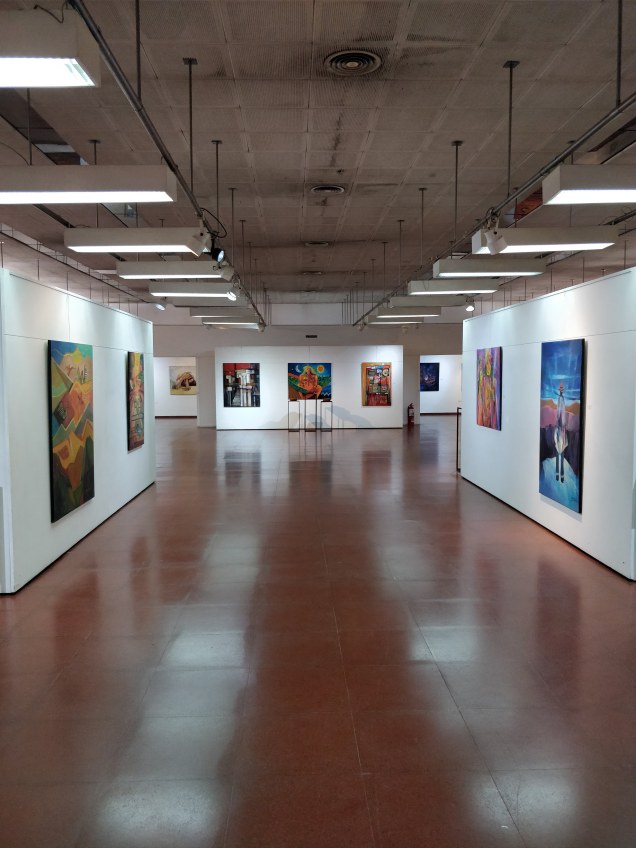 And a couple more of my favorite paintings currently on display:

The museum also features sculptures, including a bit of outdoor sculpture space, although the real work on display here is my terrible, terrible photography:

Right outside the front door, a sculpture of a woman with a mate.

There’s even a tiny shop, although it was unmanned during our visit.

So if you’re in Luján, pop into the art museum and give your eyeballs an art snack. It’s free, open seven days a week, and located right by the basilica, several places to eat, other attractions, and many, many souvenir stands offering a bewildering array of basilica-branded merchandise.