Tucked in the Paseo La Plaza on Corrientes Ave, the “street that never sleeps” and a center of theater and tango, is the Cavern.

Named for the Beatles’ frequent venue, it’s a Beatles-themed complex that includes a cafe, a club, a theater, performance spaces, and a museum.

The Museo Beatle belongs to one of the most charming categories of museum, “personal collection that got way out of hand.”  In this case, Rodolfo Vázquez began collecting Beatles stuff at the age of 10, and by 2001, he had the Guinness Book of World Records certified biggest damn Beatles collection (re-certified in 2011 by Guinness as having 7,700 items).

The museum is organized chronologically, and how else would you start, but with the Fab Four’s frickin’ births?

Don’t worry, Pete Best fans, the museum’s got you covered. 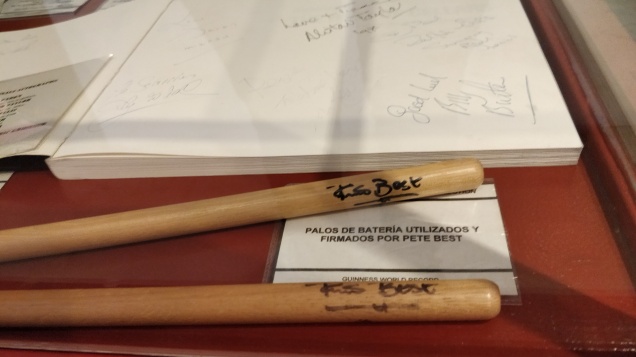 I’m not actually a big Beatles fan; I don’t know much about them.  I was surprised by how meteoric their rise really was.  They added Ringo and recorded their first album in 1962, released it in 1963, and by 1964, the merch production was insane.

Continuing on through Beatlemania…

…and on to Sgt Pepper’s something something.

I understand Beatles memorabilia, not unlike their aesthetic, gets weirder from here.

There are various records, advertisements, and autographs of anyone even tangentially related to the band throughout the museum.  All that is well and good, but you want a photo op.  Of course you do.

You do, eventually, come to that point on the timeline when things, as all good things do, come to an end.

But as I’m sure every other person on the planet knows, because I know this, the Beatles didn’t just vanish in 1970.  They all had solo careers!

Visitors will find nooks dedicated to each man’s solo efforts and life decisions.

Ringo…well Ringo did some things I was entirely unaware of until five seconds before I took this photo.

After visiting the museum, you can walk across the courtyard to the cafe and have a typical and filling Argentine lunch for 250 pesos (about US$5.50).

If you’re a Beatles fan or just want to see a bunch of Beatles stuff, you’ll find The Cavern in the San Nicolás barrio at Av Corrientes 1660, inside the Paseo La Plaza, which is a actually a really lovely complex of shops, restaurants, performance spaces, and trees in the middle of a busy place.  It’s close to the D line and B line of the subway, Congress, the Obelisk–a thousand ways to get there.  The museum entries are 250 pesos (about US$5.50) for foreigners, 200 pesos for Argentines and residents, and free for kids 10 and under.  Check the website for the hours.