Popped into the National Archive for the small, temporary exhibit on women workers!  Not super sure on the best translation.  Let’s go with “Impressions of Working Women.”

There’s an exhibit room just inside the Archive, where visitors don’t have to go through security.  It’s pretty small, but a nice place for a curated show of documents.

Plenty of great old photos, which, of course.  It’s the Archive.

Actually, though, know what was most impressive?  The freaking exhibit room.

That’s all for this minipost!  If you’re in Microcentro taking in the government-affiliated tourist sights, you’ll be close to the Archivo General de la Nación.  Pop in for a few minutes to see whatever historic documents they have out for eyeballing and the amazing exhibit room at 25 de mayo 263, weekdays from 10 to 5.

Bellas Artes is one of the big dogs, obviously.

As such, it has a very fine collection, and since this is a blog post, I will not be providing a thorough overview.   For one thing, the museum has a very nice website partially available in English (and a guide app only in Spanish).  So I’m just going to do a light overview!  There’s just so much art!

Obviously, as a national fine arts museum, Bellas Artes has a strong collection of Argentine and Latin American art.  The international collection trends noticeably to European art.  Let’s have a peek, starting with these things, because I am a big fan of hair decoration:

These are peinetónes, very large versions of the Spanish peineta that were distinct to the fashion of the Rio de la Plata region in the 1830s, until shitty men took to criticizing the elaborate and expensive combs in the most sexist way possible (“terrible women neglect their families and whore themselves out in pursuit of this extravagance!”), and their use declined.  You can find several contemporary illustrations mocking the peinetón.  Certainly, there are reasonable criticisms to be made of fashions that are uncomfortable, inconvenient, and costly, but “look at these shallow immoral bimbos” is just the worst.

On to the older European stuff!

Early 1500s Virgin and Child with St John from Florence.

This is a Belgian-made tapestry from the early 1600s.  As someone who can barely sit still long enough to embroider a simple outline figure on a handkerchief, I am always deeply impressed by tapestries.

This is a 17th century wood sculpture, “An angel with the head of St John the Baptist.”  This stuff is all pretty typical of the time and region.

There’s a lot of Rodin, owing to the museum’s first director’s admiration of him.

But let’s turn our attention to the Argentine artists, my very favorite feature of Bellas Artes.

And into more modern styles:

There are also, of course, Argentine sculptors represented, such as Alberto Heredia, who worked with discarded items to create his censorship allegory “The Gagged” in the early 1970s.

I’m also tacking on Joaquín Torres Garcia, who wasn’t Argentine but Uruguayan, because I really love his stuff so much.

Finally, here’s views of a couple of galleries, to give you a feel for the place, and the difference between the classical art galleries and the modern ones.

The Museo Nacional de Bellas Artes is big and pink and hard to miss at Av. de Libertador 1473 in Recoleta.  You can get there on a lot of bus lines and the H line of the subway.  It’s open 11am to 8pm Tuesdays through Fridays and 10am to 8pm Saturdays and Sundays.  It’s free for Argentina residents and 100 pesos (currenetly about 3 bucks US) for non-residents, although it is free on Tuesdays and 645pm-8pm Wednesdays through Sundays.  There’s a free English tour at 230pm on Wednesdays and Fridays.  Most of the signage is also in English.

Now that so many of us carry pretty decent digital cameras with us all the time, it’s easy to forget that photography used to be pretty bulky.

But there is a place you can go to remember when photography had some heft, by god. That place is the Museo Fotografico Simik, which grew all up into El Bar Palacio, one of the notable bars/cafes of Buenos Aires.

The tables themselves are display cases, which is pretty cool.  And while there isn’t much information to go with the stuff, there is plenty to look at everywhere. 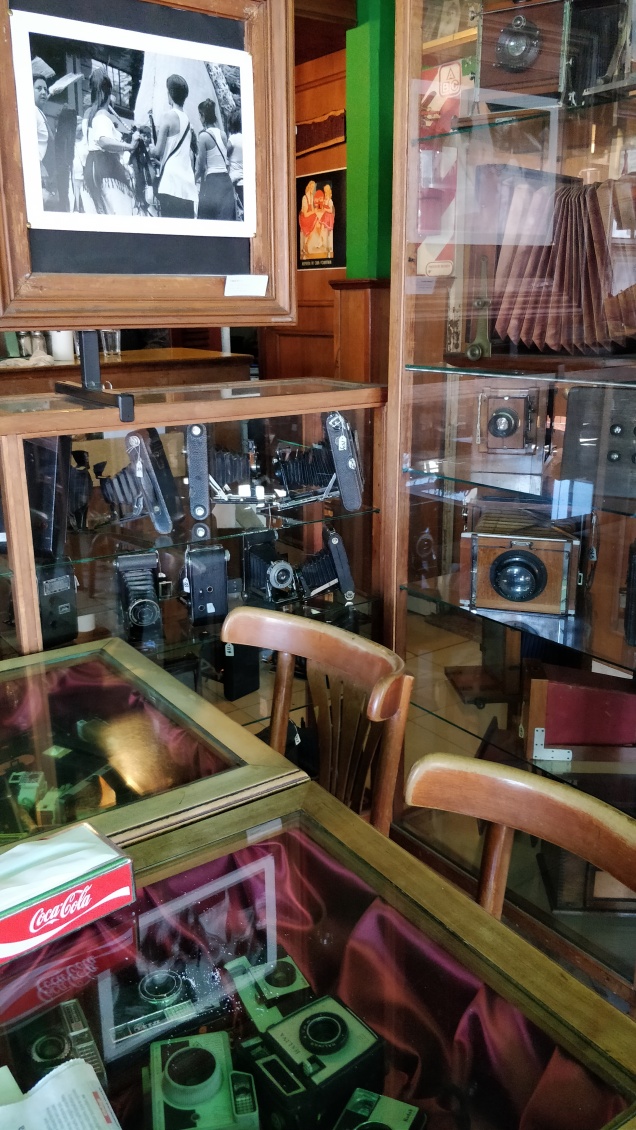 There are lots of folding cameras: 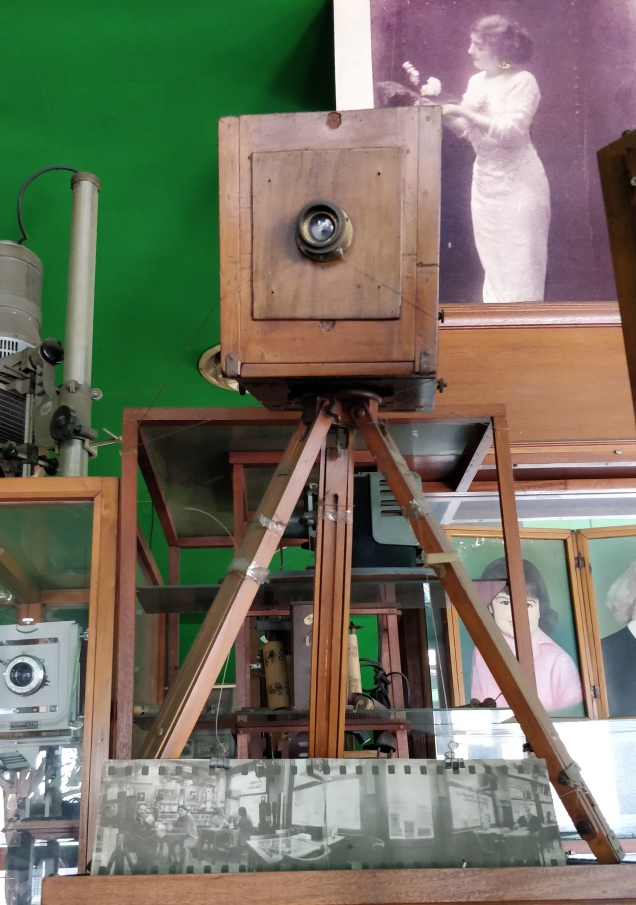 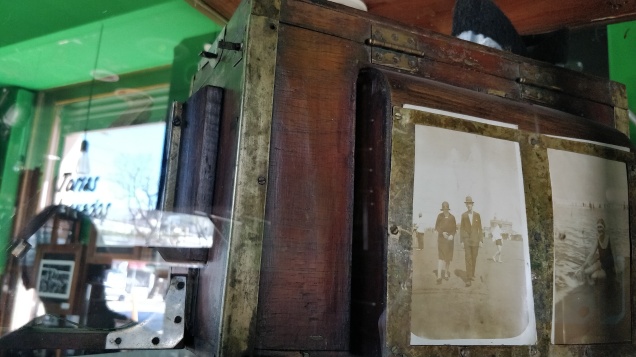 These cameras have some histories attached to them:

Number 22, for example, is a 1940 Kodak Crown Graphic from the USA that photographed Pedro Cahn.  Number 2 is a 1927 Zeiss Ikon from Germany that photographed human rights activist Estela de Carlotto, a Grandmother of the Plaza de Mayo, and artist Guillermo Roux.

There are some more recent cameras, too.  Look at these shockingly gaudy flashes: 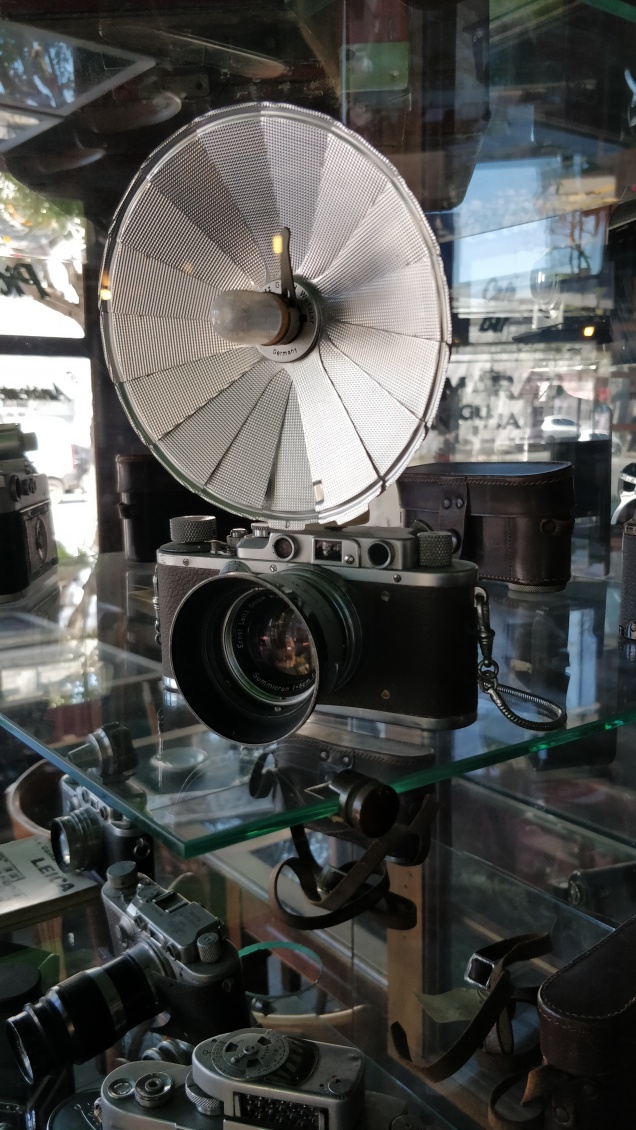 My favorite things were the stereoscopes!  You can look inside this one: 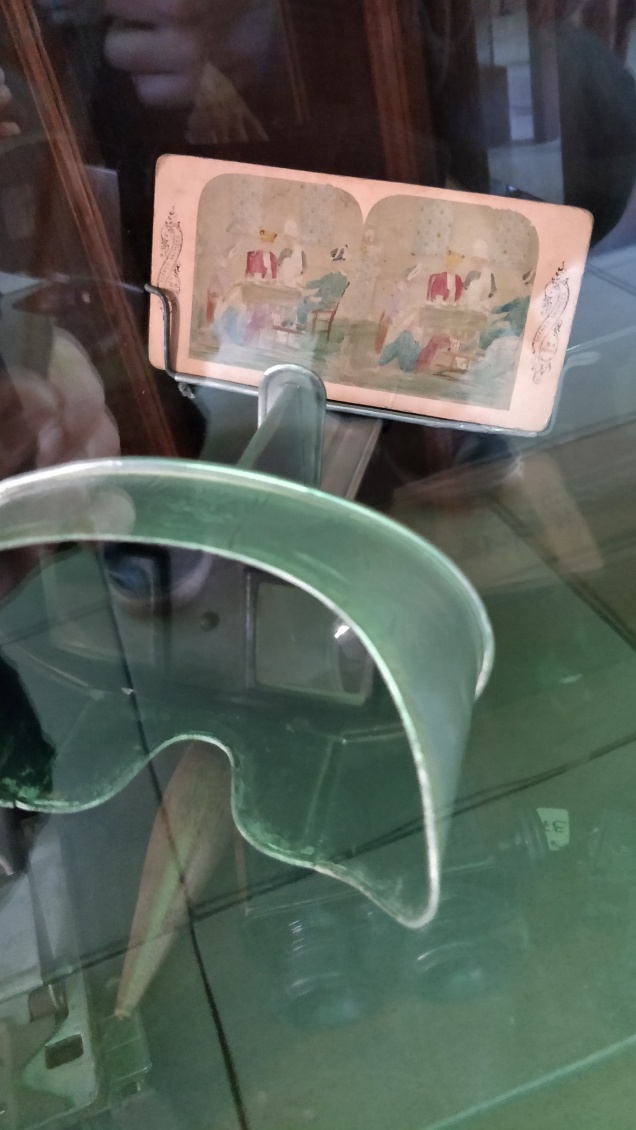 The very coolest thing is a large 1890s camera pointed at the front door.

If you look at the back, you can see the street outside, and it is rad:

I had a really nice visit; it’s an interesting spot for lunch.  The Museo is in Chacarita, and it is open from 7am (!!!) to 1145pm every day but Saturday, when it opens at 8am, and Sunday, when it is closed.  There is no cost to enter, but it is a cafe/bar, so have a meal to help keep the lights on.